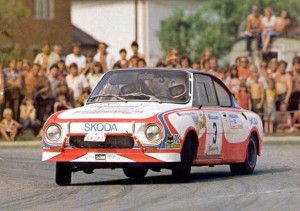 The Skoda Motorsport appeared in the world of rallying in 1960’s. In the early years the factory is running the Octavia and 1000MB models, then they followed by the 110, 120 and 130 series. These race cars were slightly modified compared to the production models. Because of their small capacity engines they can’t finnish on the top places in the overall classifications but they done well in their category. The factory is come out with the 110 R Coupé in 1970. This car was the base of the 130RS. The 130RS was introduced in 1974 at the fair of Brno. It was 10 centimetre wider then the production car and it was equipped with a 4 speed gearbox and a 1300 cc engine with Weber carburetors and dry sump. The performance of the engine was near to 130 HP. In the following years the factory is running the cars on rally, course and hillclimb races and it became the most successful car of it’s class.
The most successful and most known driver of the factory was John Haugland from Norway.
Almost on every race where he starts he won his category, even on World and European Championship events. 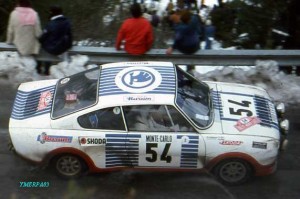 The top of the factory programme was the 1977 Monte-Carlo Rallye. The Skoda Motorsport represent itself with three cars in the Principality. The Blahna – Hlavka duo was victorious in the Gr.2 category and finnished twelfth in the overall classification. The Zapadlo – Motal duo was fifteenth in the overall classification. The race is win by Sandro Munari with a Lancia Stratos and only 1.8 or 1.6 litre engined cars finnished before the Skodas.
Between 1977 and 1981 Václav Blahn, John Haugland and Miloslav Zapadlo on a several World Championship races – susc as 1000 Lakes and Acropolis – were finnished in the top ten. Martin Holmes called the RS the East European Stratos, because it was always first in it’s category. In the case of the 130RS it has 1HP for every 7th kg. The RS was performed the best on the tight, twisty gravel stages. The four doors Skoda 130 become the base of the factory Group B car. The factory is developed the 130LR from 1983 to 1984 and it get homologized in 1985. The lined-4 cylinder, 1.3 litre naturally-aspirated engines performance was 130 HP. The car could reach –depending on the final ratio and wheel diameter – a 220 km/h top speed. The weight of the car was 850 kg and certainly it was rear wheel drived. The LR is realy soon became the most efficient car of it’s class and dominating the 1300 cc category for years by defeating the Opels, Fiats and Peugeots. The banning of the high performaced Group B cars – Peugeot 205 T16, Lancia Delta S4, Audi Quattro S1, Ford RS 200 – wad not affected the lower performanced cars but the FISA in 1986 forbade the further development of them. However they could race in the following years in national championships. The 130LR had countless prominent results during the years until it’s retirement in 1988. 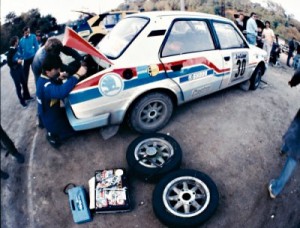 In 1985 John Haugland was first in his category and 15th overall on the RAC Rally with a stunning performance. The Czech Ladislav Krecek was also victorious in the category on the British, 1000 Lakes and Acropolis World Rally Events with the 130LR. Pavel Sibera also rolled to the finnish podium as a category winner on a 1987 RAC Rally. In the same year the Czechoslovakian driver won the Mogürt Salgó Rallye which was one of the BBK events.